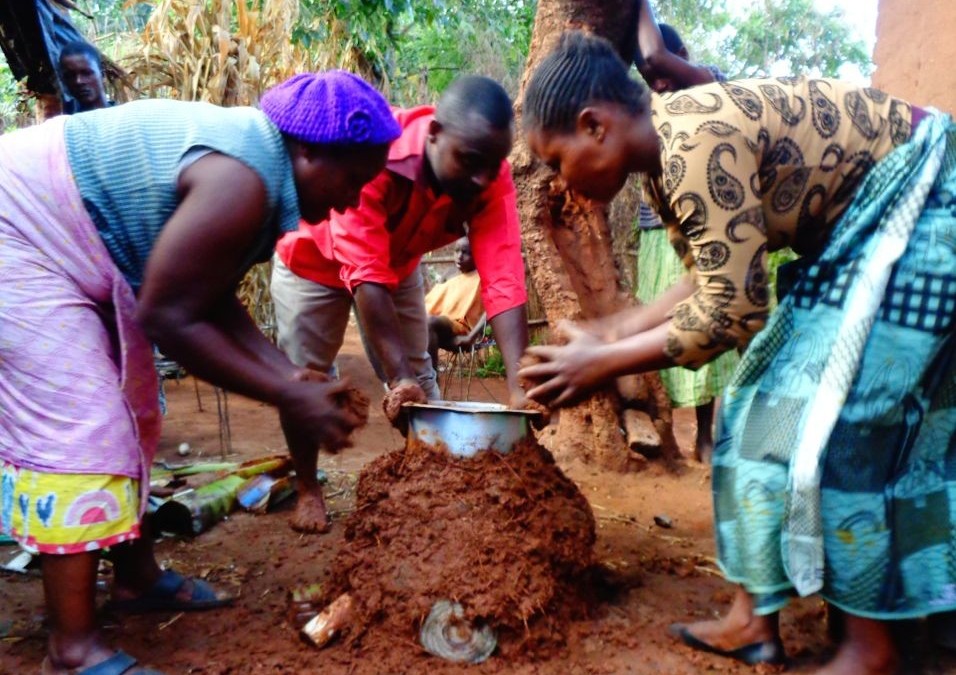 For the past 3 weeks, Kusamala was happy to have Benjamin Nyaru, Field Operations Director at The Red Soil Project, back at Kusamala. Benjamin’s first visit was in 2012. At that time, he trained Kusamala staff in permaculture techniques, and helped with the design of household demonstration gardens. He returned in April in order to evaluate the efforts achieved so far in implementing permaculture at the household level.

In addition to reviewing the progress of household demonstrations, Benjamin also taught the neighboring community of Landscape how to build a rocket stove using locally available materials. As in addition to his extensive permaculture knowledge, Benjamin also has extensive experience in rocket stove building in his home country, Uganda, and in other African countries. Over a 3-day training period, including demonstration and hands-on participation, Benjamin trained Maureen and Rhoda, from our hardworking “Memo” team, on how to build a rocket stove. They will in turn act as teachers for their community and disseminate this knowledge. Maureen and Rhoda now have their own rocket stoves and will help others build their own. An interesting note here is the use of banana stems to shape the stove and air-inlets; the banana trees were initially planted during the home demonstration garden designs 3 years ago and are now a resource for the stove project. Why a rocket stove? It has been designed as an efficient alternative to the typical 3-stone fire, an open fire cooking method used in many parts of the world, which not only requires a high amount of wood for cooking but also harms women’s health because of smoke inhalation. Compared to this traditional cooking method, a rocket stove is reduces fuel use by 45% and reduces the amount of smoke produced by 75% These stoves are a basic technology accessible to almost everyone who wants to learn: the only building materials needed are sand, clay and straw, which make them free to construct in the majority of cases.