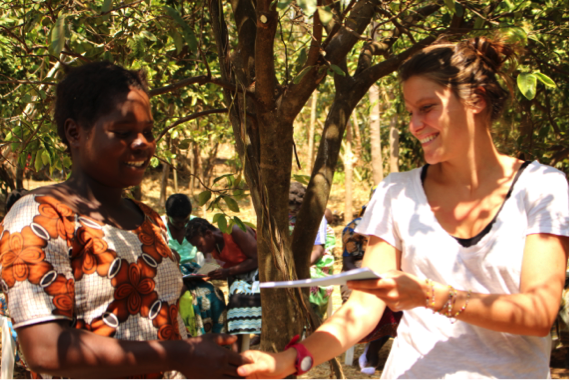 Our second week of training from August 24th to 28th left no stone unturned and went on very well. Seventeen farmers attended the 5-day training workshop including the local extension worker, Mr Rodrigue Mazengera, as well as the forestry advisor, Mr Chunala Mabvuto. In addition to attending the course, Mr Chunala Mabvuto also offered his time to teach agroforestry to our two groups of participants emphasizing the importance of planting nitrogen-fixing trees to improve soil fertility in staple fields. Participants will then be able to request nitrogen-fixing tree varieties such as Leucaena, Acacia, Faidherbia albida seeds from Mr Chunala for distribution and planting. Tephrosia seeds will also be distributed to the farmers by Isaac Banda and will be supported with tree nursery establishment so that in January, trees can be planted.

We then concluded our 10-day training with a certificate ceremony where each participant received a manual. Training manuals were distributed to every participant in order to keep the knowledge gained within the communities. As already mentioned, our curriculum focused on addressing soil quality issues experienced in the fields including soil erosion, soil infertility and weed pressure in the staple fields as well as salt accumulation in the dimbas. Incorporating soil science knowledge helped farmers to realize the necessity of implementing the practices taught by first understanding and getting to know their soil better. The issues affected the farmers were identified during our field visits in June and appeared to be very common within the area. With that in mind, we are hoping that our participants will act as “master farmers” within their own communities and share their knowledge with their neighbours. Addressing those issues is meant to be done at a community level rather than at an individual one for greater impact. Patricia Phiri from Satema receiving her certificate and manual A participatory community map has also been created with all the participants at the end of the training. Data gathered during the field visits also helped in designing the map. The idea is to identify “skilled” farmers within the 6 communities that are represented by the farmers who attended the workshops. As some of them have already been trained at the Centre, we hope that identifying their skills will help create a network of “knowledge sharing” between the farmers. Realizing the potential and resources within their own communities is a first step in building stronger communities. Some of the skills mapped include compost making, agroforestry, seed saving, soil erosion and water control, natural liquid fertilizer, intercropping/crop diversity, crop rotation, natural pest management (see below). Finally, our work continues with a first step in addressing soil erosion. As some farmers cultivate on steep slopes, soil erosion is increased and threatens their crop production. The Malawian government has been promoting Vetiver strips planted on contour as an effective way of controlling erosion. Vetiver is a fast growing deep rooted perennial plant that forms a living barrier which arrests soil movement. The easiest way to find the contour and to mark the correct line for planting the grass is using the A-frame which was taught during the trainings. In that aim, 4 tons of Vetiver will be purchased from a neighbouring community, Nkhadze, where participants went for Vetiver planting demonstration during our training. A communal nursery will then be created at Isaac Banda’s dimba, our community liaison, and distributed to the farmers before the rain comes. With those 4 tons, about 12 farmers will be able to build 3 contour lines with Vetiver grass in their field. After 2 years of establishment, the plant can directly be uprooted from the field and transplanted, and in this way distributed to other members. Isaac Banda and Sam Mofolo, project coordinator, will be in charge of following farmers until November for constructing contour ridges for Vetiver planting. Other practices to be followed-up include compost making, tree nursery establishment, mulching, proper crop rotation and agroforestry tree planting.